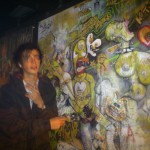 Releasing his debut album "Timing Is Everything" on 22nd July, Kid Vishis has emerged as one of Detroit’s most talented lyricists over the past ten years. While still at school, his skills were honed during the “family freestyle basement sessions” with his elder brother Royce da 5 9, before touring initially as the Slaughterhouse veteran’s hypeman. Over time, these shows saw him perform his own freestyle slots to sell out crowds nationwide, sharing bills with the likes of Rakim and Slick Rick, Ghostface and many more.

He has also featured on a number of his brother’s mixtapes and albums while releasing the first of his own "Sick ‘Em" mixtape series in 2007. We spoke to Kid Vishis to learn more about his hotly anticipated debut, the impact he intends to make and his viewpoint on the fast changing hip-hop industry.

Let’s talk first about the album production. Who are the producers?

Kid Vishis: There was a kid from Toronto, Canada named Nick Zervos, and this kid… I mean, I met three out of the four guys through twitter, and this one guy was sending me beats and beats and beats, and it was just like, they were good, but I needed a certain feel for my album, you know? And I came across this one beat that he sent me and he was like look, this beat is it, so I was like a’ight let me give it a shot, I heard it, and I just vibed with it instantly. It was just like, this HAS to be the intro. Everything about it just fitted perfect.

Nick Zervos did the intro, then we got Chase Moore from Sacramento. He did the majority of the album, he was working like me. He was just making a batch of these crazy beats, and I was in a zone when I was writing like crazy, so we just basically caught a vibe. Then you got Nemisis from New Jersey, I’ve been working with him since my second mixtape. Then last but not least is Mr Porter, my favourite producer in the world, he blessed me with two beats.

Could you describe a typical day in the lab, creating the album?

Kid Vishis: My typical day period is: get up, me and my brother go to the gym, after the gym we go straight to the studio, and sometimes we’re working with each other, other times he’ll be in one room and I’ll be in the other and we both just be doing our thing, I mean it’s kinda like mandatory. It’s almost like a boxer; if he’s out and he’s drinking a lot he should probably feel like he’s slipping a lot, so he has to go hit the gym real hard to feel like he still here, he still got it. So what it is, it’s just an everyday thing.

Do you feel in your prime, as though this album is the best work you’ve ever created?

Kid Vishis: Actually, I think I’m reaching my prime. I think this album is just the beginning of the music part, like pretty much my music career to date, because the situation with me is that all my life I wasn’t rapping and freestyling and stuff like that, I decided to do that around 2003 and it just became official. In 2003 when I got on the Royce record I’d probably wrote like, three raps in my life, so that explains like the process of finally now being ready to actually just start putting stuff out.

This album is just the beginning. I wouldn’t say its the best work I could do, because the stuff I’m working on right just now is like just getting better, everything is still getting better with this momentum that I’ve got.

I want them to hear the album and say woah, this guy can go, like this guy can rap. I want people to just enjoy somebody who actually takes rapping serious, not necessarily like everything is rappity rappity rappity rap, but I just had fun on this album, that’s all i did. I caught a little zone, did the album real quick and we gonna do another album this year. The mixtape I’m doing is going to be like the album; all original stuff.

When will the mixtape come out?

Kid Vishis: It’ll be out a week before the albums out. Well, a week and a half, possibly two weeks before the album. We should be about ready to leak a record real soon from it just to get the steam rolling, but that’s gonna be something else.

What impact are you hoping to create?

Kid Vishis: I just want to make my stance. You know how they say underground hip hop artists will stay underground, and the mainstream artists that aren’t really doing the exciting things that the underground guys are doing, but they are getting like more money, more credit? I don’t agree with that – I think times are changing, and I think that it’s possible for somebody to be able to rap, be talented, creative and still hit the mainstream but they do it their way. And I’m gonna do it my way, so then that way when the mainstream comes towards me, there’ll be very little adapting that I’ll have to do (laughs).

It’s definitely not a nowadays type of album. I mean it has certain feels that kids can relate to like my nephews and nieces who like certain records off it, you know they’ll listen to a certain record and they’ll be like “this is the one right here”, and these are like sixteen-seventeen year olds. I think there’s gonna be something for everybody on the album, but it’s my way. I’m not reaching for radio success, I’m not reaching any mainstream kind of look, I’m just doing me.

Why did you decide to give ‘Look At All My Shit’ the first visual?

Kid Vishis: I think that’s a good, solid record to start with because the visual… When we actually do the visual for it, there’s gonna be a crazy visual. It’s a crazy concept, I mean basically today you got instagram and all these other social media outlets where you physically show off everything you have, so you still got people out here who ain’t got as much stuff as you do and they jealous, they’re hateful, and they want what you have. And I’m just trying to make them aware of that you know, if you’re going to be putting all your business out there then just be careful, that’s the point of that song.

It’s not me boasting, it’s just me basically mocking the people who are doing this type of stuff, like they’re putting stacks of money on instagram. Like its cool to do that if you understand what you’re doing, if you understand that there’s people watching who want that. So at the end of that song I say you know, if you aware, and you already prepared for that then live your life.

How would you respond to people who might assume that you’re only trying to make a name off your brother Royce’s fame?

Kid Vishis: Well, that is what it is. One thing I learned about people is that people have opinions that switch all the time, based off whatever moves you make. If you make the right move, then their opinion will switch. I can’t go back myself into a corner because people are like “That’s Royce’s brother and hes trying to do this and that”.

There’s people out here who got a lot of success who rap like somebody else, and they don’t know them, they’re not related to them! I’m proud that Royce is my brother, but before he was even rapping I was proud of my brother, so if that’s the only criticism they got then that’s cool with me.

How do you feel the industry has changed, from when you started out performing live freestyles to how you see things today?

Kid Vishis: It’s changed a lot, a lot. When I first started rapping like, you had to actually have bars, like lyrical ability and creativity to actually have people listen to you at all, you know what I mean? If you were in New York around where I was freestyling on stage – if you didn’t come with it, they’d boo you, or they just wouldn’t say anything at all, and that’s just as uncomfortable as a boo, there’d just be silence. Now it’s more about jingly type of songs that kids will just have fun with, make little dances to and stuff like that.

So the people who’ve been riding with me, they know how I do. They know what I’m capable of doing and they know I’m not going to change, I mean I’m still growing as an artist, but there’ll be no change.

Thank you very much for your time Kid Vishis. Any shout outs?

You have no idea, I’m gonna be around for a good minute!

Kid Vishis – “Timing is Everything” is released on 22nd July 2014 on Seven 13 Entertainment
It can be pre-ordered at http://www.seven13ent.com

Video “Talk Behind My Back”